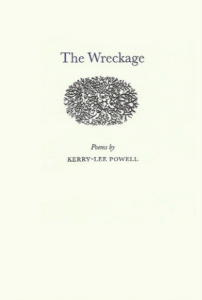 The lyric poems in this pamphlet were inspired by a shipwreck endured by Powell’s father during the Second World War, his subsequent struggle with post-traumatic stress disorder, and eventual suicide.

“Powell’s The Wreckage is a collection of clear-eyed, slow-burning lyrics inspired by the psychological struggle and suicide of her father.” Times Literary Supplement